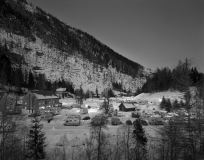 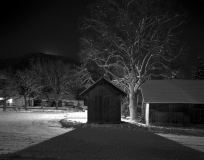 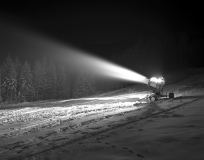 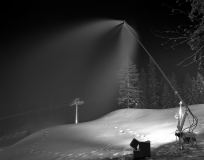 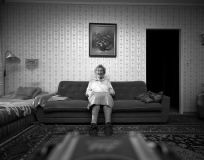 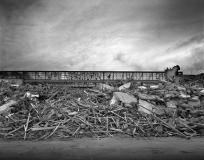 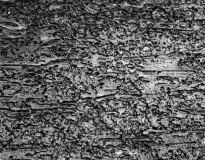 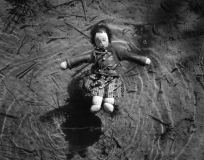 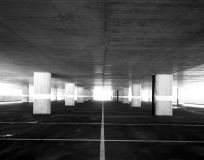 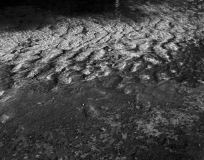 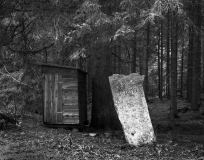 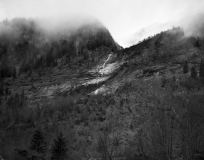 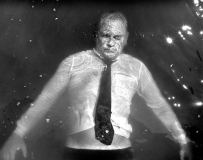 Shimmer in the dark

The bike, which the English photographer Ian Wiblin photographed in the dark in the mid-1990s, looks like a drawing. Involuntarily one thinks of the flag bearer by Urs Graf, who was drafted in 1514 with white ink on dark coated paper. As there, the smooth metal surfaces reflect the light a little: handlebar and parts of the bycicle fork and frame, accordingly the flagpole and bare parts of the suit of armor. These bright lines require the viewer to establish relations and to complete the sparse appearance of a plastic structure. Such representations are also attractive in another respect: the depicted objects often seem to float as if they had lost the ground under their feet with the missing parts.

Reinhart Mlineritsch, a photo artist born in Vienna in 1950 and living in Salzburg, takes us into this world of approximations. However, he uses other means to do this. Because darkness does not always envelop and rapture things, but often they are just individual parts that lie in the shade or just views that create a somber mood: walls that testify to decay; Bridges that arch over unrecognizable depths; Self-portraits with melancholic features; cloudy waters; black forests; abandoned places; blind mirrors; scary landscapes. The darkness is understood metaphorically, or otherwise: it is a special look that takes nothing as it seems, but searches for the secrets that are hidden in the apparitions.

The photographer is not concerned with analysis or staging, but with revelation, with the visualization of something else that attaches to things next to their surface. Mlineritsch does not reveal their secrets, but leaves them to them; he points to the cryptic moments, but he doesn’t name them. For him, photography is a means of demonstrating the enigma in everyday life. What interests him is put into the center, the camera approaches his objects from the front, alignments are only rarely seen in a slight diagonal. Whether at close range or at a distance, all details are clearly visible, the unknown does not lie in blurred contours, but in the course of light and dark, in some transitions, in being between. The cutout limits the terrain in which the secrets are expressed.

Mlineritsch practices the high art of black-and-white photography, the publisher set great value on the fact that the photographs made between 1993 and 2006 were reproduced in an excellent print. Almost all of the images have the same dimensions, and the landscape format in which most of the images were made gives them a firm footing. Despite the same shape and orientation, monotony never occurs, even when viewed multiple times. The juxtapositions are carefully chosen, rarely corresponding in motifs or form, rather presented as two views, whose balanced coexistence creates an atmosphere of calm and yet reveals a restrained tension.

A very wonderful book! I place it in the series of special publications of contemporary photography, those books whose pictures also tell of the dawn, of attentive and at the same time astonished looks, of the nuances, of awakening when everything suddenly becomes clear while dreams are still present . (© Timm Starl, August 2007, www.fotokritik.at).

You can buy original photographs of the book “Cover of Darkness”: More information at reinhart@mlineritsch.com