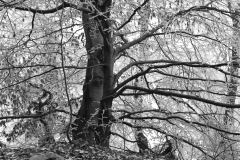 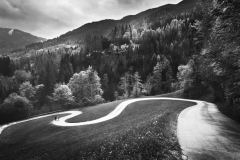 Reinhart Mlineritsch lives in Salzburg. He originally comes from business, but chose his passion, large-format photography. He is staff member at the gallery Fotohof.  Mlineritsch creates spaces of imagination for the processes of nature. He mainly works in black and white, occasionally in color since 2012. Beginning and decay, construction and destruction, he observes and discovers strange, naturally developing changes on his forays. An Example is a decaying tree in the middle of a lake – new branches and leaves are already growing on it during its decay stage. Many of Mlineritsch’s photographs stand out by their mysterious character. Mlineritsch works in his individual technique with a Linhof large-format camera, the films are developed by  himself. His series from Lanzarote, 2012, can also be seen in the exhibition. Abandoned settlements and ghost towns are recaptured by nature. Mlineritsch sometimes produces no more than twenty to thirty pictures a year. He works calmly and carefully, chooses what interests him. “Every picture is a self-portrait of me”, is painting, so to speak, by other means, or in other words: painterly. (Ulrike Guggenberger, July 18, 2016, www.drehpunktkultur.at).

You can buy original photographs of the series: More information at reinhart@mlineritsch.com